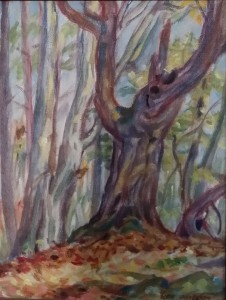 Everything my father, Ken Phillips, did he did with a passionate involvement which I think is rare these days. If, on a Saturday morning, he was stirring vile-smelling rabbit glue on the stove, which he used for preparing his canvases, he made it a thoughtful, relishing process. But, he gave the same zeal to raking leaves from the lawn with exactly the right rake for his purposes, or to working soap into his fine oil painting brushes to clean them. When he danced around the
house, testing out a new tambourine he’d rescued from the Crippled Civilians’ store in Toronto, he was quivering with pleasure at this new addition to the
many instruments which graced our home.

But when he turned to painting, it seemed to me that he painted with fire. There was a quick, sizing glance, followed by a flurry as he blended colors on his palette, then a second look, to check, followed by a sure stroke on his canvas. As the work progressed, he advanced and receded from his ground as if doing battle. Yet his painting was also a tender love-making or a dance which inspirited his pictures. Covertly, I, his daughter, watched as with brave ardor he forced the meaning into his swift strokes.