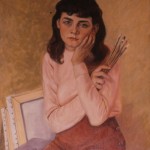 Canadian artist couple, Ken Phillips and Marie Cecilia Guard, my parents, were unusual in that they remained profoundly in love with each other for more than 50 years, and each was supportive of the other’s work. No one, my mother said to me, was ever as interesting and exciting as my father. For all the vexations caused by his full-blown artistic temperament, this remained true all of their married lives. In turn, my father adored my mother for her exceptional beauty and graceful ways, but also for her intelligence. Both studied and learned all of their lives.

My parents shared a passionate understanding that art meant everything to them. There never was a line between living their art, whether by pouring over Turner paintings in a library book or studying Rembrandt’s treatment of lace in the AGO. Each artist valued the other’s opinion over anyone else’s. A picture was never complete without a thorough critiquing by the other. Each understood the other’s way of working and was supportive of them. There was no question of one advancing without the other. 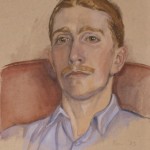 Marie’s portrait of her Young Husband

What happens when such a complex, profound partnership disintegrates? During his last years, my father became ever more difficult to live with, so in some ways his sudden death from a massive heart attack must have been a relief to my mother. And yet, without her husband to critique her work, she seemed at a loss about how to go on. There was never any question that she would continue to paint, but without his expert assessment and suggestions, after such a long partnership, I don’t believe she ever clearly saw a direction for her work. Yes, she went among the canvases, so lovingly prepared by Ken, choosing one to work on. And yes, she hunted through the frames he also had worked up so they would be ready. As always, until her last year she rarely went a day without picture making. Occasionally, she would surprise me by asking my opinion, and it was then that I saw most clearly how much had been lost.