It was only after my father retired that my parents came to consider the artistic possibilities of circuses. One Spring day, in search of new subjects, they scouted the arrival of Circus Vargas in Brampton. As they sat in the parking lot on their stools that morning sketching the build-up, they became increasingly excited by the many subjects that presented themselves. Nothing else was available for them of that caliber and glamor. They decided to attend the afternoon performance and immediately were enchanted by the color, movement and character of the entertainment. 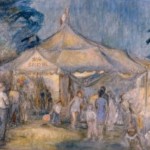 Later, reflecting on what they had seen, they recognized that the arrival of television would make it difficult for circuses to continue.  Here was yet another dying art for them to record while there still was time, and they decided to return as often as possible. It wasn’t long until the circus people noticed how they and their doings were being magically captured on paper. Intrigued in turn by the artists’ own performances, they began to open up to them. As my parents got to know the entertainers, they were invited inside the splendor, heartbreak and sometime tawdriness of their world. Because the performers were gypsies and also aliens (as my artist parents sometimes felt themselves to be), they were glad to welcome people they saw as fellow performers and to offer them friendship.

A family of jugglers with a bicycle act invited them into their trailer for tea, and this was the beginning of a number of circus friendships, which lead to letters back and forth, a commission for my father to do a painting for the owner, and even invitations for the pair to visit the troupe in their southern winter quarters.

Unfortunately, by this time, the artists felt too old for such an adventure, but over the next few years, my parents searched out circuses, and particularly Circus Vargas, whenever possible and created series of pictures based on their sketches.