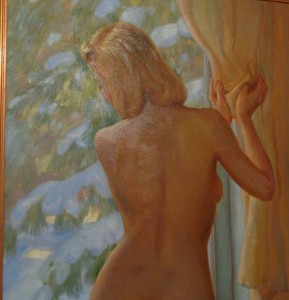 Marie’s interest in nudes had started when she had seen Botticelli’s The Birth of Venus. Now she was struck by new possibilities. Her favorite quotation was Keats’ “Beauty is truth, truth beauty, –that is all/ Ye know on earth, and all ye need to know.”, from his Ode on a Grecian Urn. She had been taught to search for a truth and beauty which lies behind appearance, a deeper truth which is to be found through a knowledge of structure. From classical times, art teachers have often dictated that “The shape of the human body is the most complicated and subtle thing in the whole world…..The student who has learned to draw the nude can draw anything.” (Even into her nineties, my mother used to astonish medical professionals with her understanding of anatomy.)

In figure study she had been taught to construct her subjects by first studying their structure, that is, by reading the body of bone and sinew under its skin. A quest for the fundamentals both of design and deepest essence of her subject meant for her a return to studying the nude. At this early, important stage in her career, my mother would have agreed with Matisse: “[What ]I am after above all is expression. What interests me most is neither still life nor landscape, but the human figure. It is that which best permits me to express my almost religious awe towards life.”

The first life model my mother had ever drawn was at a small outdoor class she attended with my father across Toronto harbour on the Toronto Islands in 1929. From when she was a small child, she had loved classical figures, including sculpture. Now she found the quest to convey this most challenging of subjects very exciting, particularly when her subject was enhanced with outdoor light. Although there are some studies of male nudes in Marie’s collection, she generally painted females, both because they were most available to her, and possibly because, as Kenneth Clark observed, it is arguable that the female body is plastically more rewarding.

For the 1934 exam of her O.C.A. model class, teachers had rigged up an ugly model as Salomé, accompanied by a ludicrous papier mâché head of John the Baptist. Being in her post-graduate year, my mother was entitled to refuse to paint this and she did. Instead she substituted the 72″ x 36″ Upwards, or Aspiration, as she first called it. This painting began with Marie’s fascination with warm and cold light. She had picked up a large piece of black transparent drapery at a sale, and wanted to study the effect of the shadowy veil with the warm flesh. Ken, with his sensitivity to Marie’s work, designed an attractive custom frame with a continuous band of carved leaves. In 1935, Upwards had the distinction of being exhibited in the then highly prestigious Canadian National Exhibition fine art pavilion. And the newspaper reviews? “The outstanding [nude] is entitled Upward and depicts a six foot woman, innocent of apparel, standing on tiptoe, with upward glance as if looking to far hills”.

At this time, no one was exhibiting anything comparable to my mother’s ambitious nudes. As she recalls it, six nudes were included in the O.S.A. show of 1936. As well as one each by her and my father, there were two by men, in the style of the Old Masters, and with very little color, and two by women, but of a smaller scale than my mother’s.
During the thirties, the young woman’s pictures became astonishing. Frequently as large as (or larger than) life, these portraits and figure studies in oil were suffused with light; they reflected a radiant sense of possibility and promise. Throughout this period, Marie’s nudes revealed eros, harmony, energy and ecstasy. She examined woman in many aspects: closed and remote (as in Idyl,  her back view of the nude draped in chrysanthemums), or open and daring, (a figure with a background of flamelike poppies, painted with an almost glaring boldness, and with her arms folded defiantly behind her head, challenging the viewer with a direct stare.).  In keeping with her classical upbringing, these are women larger than life, women as goddesses. This was work that obeyed Renoir’s challenge: “Paint with joy, with the same joy with which you make love.”

Back to Part One 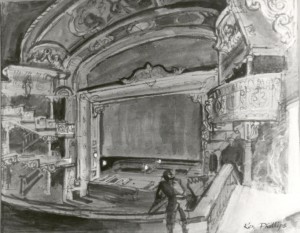 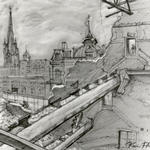 Early one morning in March, before going to his advertising job at Simpson’s, my father, Ken, trudged the many blocks from my parents’ Charles Street apartment to the Art Gallery of Toronto [sic]. He was badly hampered in his downhill journey by the two large paintings he and my mother, Marie, were entering to be juried for the year’s prestigious O.S.A. [Ontario Society of Artists] exhibition. He made the trip on foot, partly because he could not afford the carfare and partly because the large pictures were too awkward to wrestle onto the streetcars.

In Toronto in the Thirties, a lack of gallery space, which could have enabled artists to exhibit individually, meant that the exhibition system was dominated by artist societies such as the O.S.A. and the R.C.A. During this period, and into the war years, in spite of their youth, (Ken was just 26, and Marie 27) my parents exhibited significant works almost every yearat the O.S.A. show, and also had paintings accepted at the R.C.A. Toronto shows in 1930, 1934 and 1935. Few of their classmates from the College of Art exhibited in the professional shows. As my mother recalled, since most of them did little work beyond their class assignments they had little to exhibit.

You could tell from the outside of the envelope whether or not it contained an acceptance, she recalled. And if the letter was a ‘yes’, it meant that there was the further excitement of attending an exhibition opening. As Art students, my parents generally attended the art gallery during the daytime, when they could study the exhibitions for free.

That year, my mother’s impressive, life-sized nude, the largest painting in the O.S.A. exhibition, was given pride of place on a wall of its own, while my father was represented by Miss Margot Guard, an elegant, somewhat smaller portrait of Marie’s beautiful younger sister in a white silk dress, with a black chiffon cape.

At an opening, they were confronted by a crush of dignitaries in formal dress. Some of the more experienced artist stationed themselves close to their pictures. Unfortunately my young parents were too reticent and unsophisticated to try promoting their work this way. The most they felt able to do was to station Ken’s excited brother Joe and Marie’s sister Margaret on either side of their pictures, to eavesdrop on the viewers’ conversations.

What mattered most to the couple was their painting. Surely if they continued to work and improve, in time they would meet with public success. Meanwhile, inspired by each other’s untiring efforts, they continued to study and paint.

The following year, Marie’s Upward was followed by Ken’s highly effective 1936 exhibition piece Votaress, a full-length painting of a nude kneeling, and holding grey drapery above her head. This time it would be his turn to have the distinction of being the largest picture of that year’s O.S.A. exhibition.